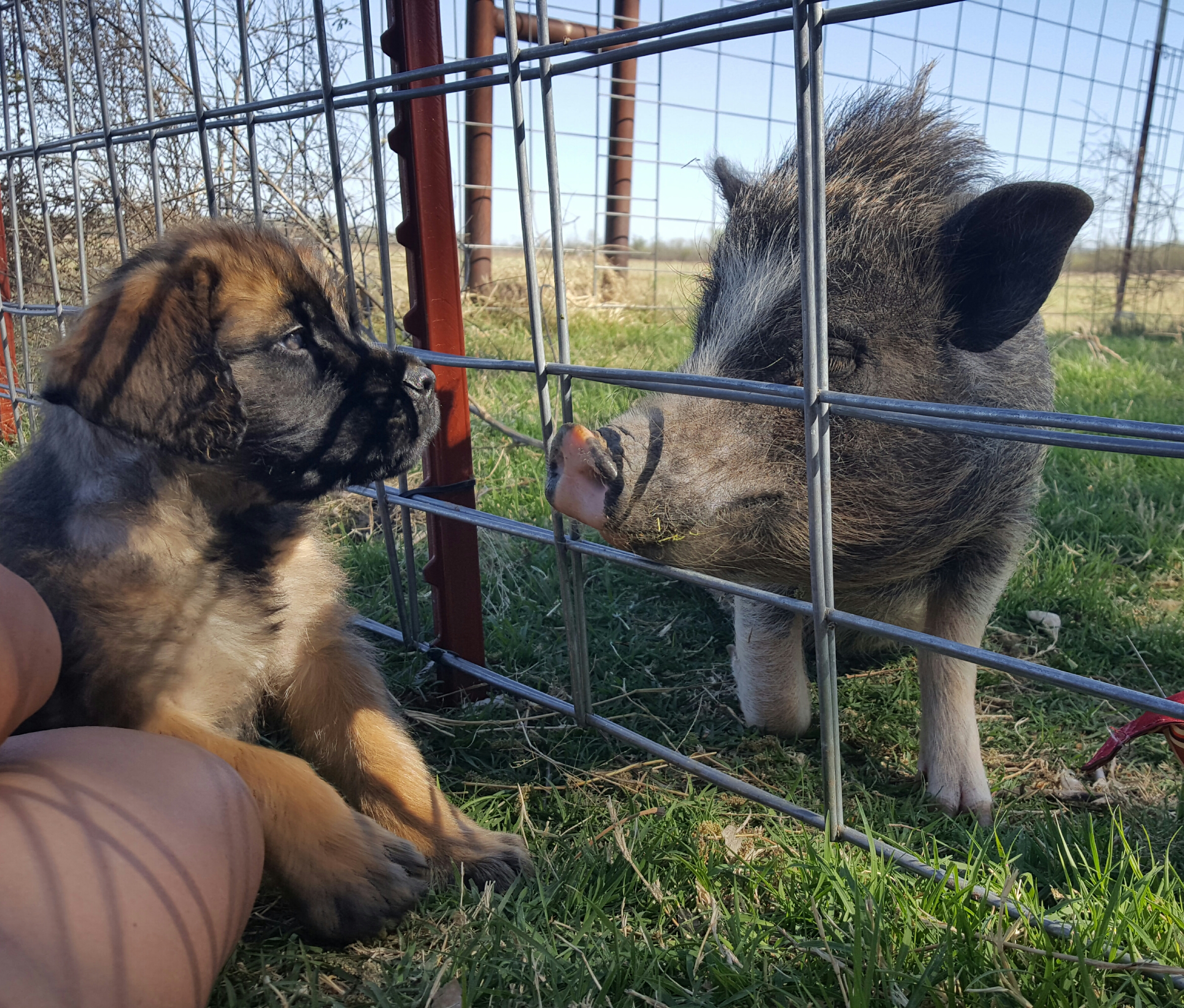 Introducing a new puppy to the pig household.

First, it’s important to understand the dynamics between pigs and dogs. Read this article to understand how they communicate differently and where dangerous conflict can arise. By nature, dogs are predators and pigs are prey animals. They act and react very differently. An annoyance or herd-challenge can become explosive when least expected. Pigs and dogs should never be left unattended without supervision.

You should also understand your pig’s own personality and know that whatever you do, the pig may or may not be able to get along with the dog. At the same time you can greatly increase their chance of tolerance or even friendship by teaching the puppy strict boundaries and manners around the pig.

Some pigs are more accepting of new “family members” of any species, while others are very confrontational feeling the need to challenge anyone that enters the family, in order to maintain their hierarchy ranking. These challenges come in the form of aggression – charging, teeth chomping, biting, and head swiping. The pig’s advances can be corrected by moving them away from the puppy with a sharp verbal correction to assert your place as leader while distancing the pig from the sensory trigger.

During supervised introductions, do not allow seemingly adorable puppy harassment of the pig. When the puppy wants to play he will innocently pounce, jump, bark, or even paw at the pig. Nope. Don’t even give him a chance. That greatly intimidates the pig who will them react defensively and quickly become resentful of the dog, long term. Pigs are not as forgiving or as patient as dogs. Teach the dog to be quiet and calm around the pig. Toys are for playing, pigs are for relaxing.

To introduce the pig and the new puppy, it is best to ensure they each have their own safe areas inside or outside, wherever they are mingling. A fenced in yard can be easily separated, or small pens put up with livestock fencing. Tractor Supply and other farm stores carry 16 ft length metal fence panels for $16-22 each. Give the pig and puppy a chance to socialize through the fence at their own leisure – no forced introductions. If they would like to mingle they can come to the fence to sniff each other. If they are uncomfortable or overwhelmed they each have space to walk away. Let them meet off and on, anytime they wanted through that fence. If puppy gets excited, paws at fence or barks, correct the behavior immediately and then given a toy to redirect his energy while the pig has a chance to investigate this weird little friend. If a pigs mohawk goes up with tense body language, reassure them everything is ok and give them some scratches. After a couple weeks or when everyone is comfortable with each other through the barrier, you may start going into the same space together. During this time it’s important to closely watch body language to prevent altercations before they have a chance to happen.

The two things that are imperative to control especially in the beginning, is the dog’s exuberance & the pig’s fear. That’s where a lot of pig/dog relationships go wrong. The owners don’t understand what they are seeing from a scared, defensive pig, and they don’t realize that cute playful friendly dog is unintentionally terrorizing the pig. This is NOT the dogs fault, it is not done maliciously, it’s simply in their nature to be friendly and playful. It’s also in a pig’s nature to be cautious, defensive, and reactive. As a prey animal, that is how pigs survive. Their life depends on it. Minimize that conflict of personalities every step of the way. A 110% effort on your part in the first few days & weeks will be rewarded 10 fold over the next 10+ years.

Enjoy your new addition and always keep safety first – for everyone. 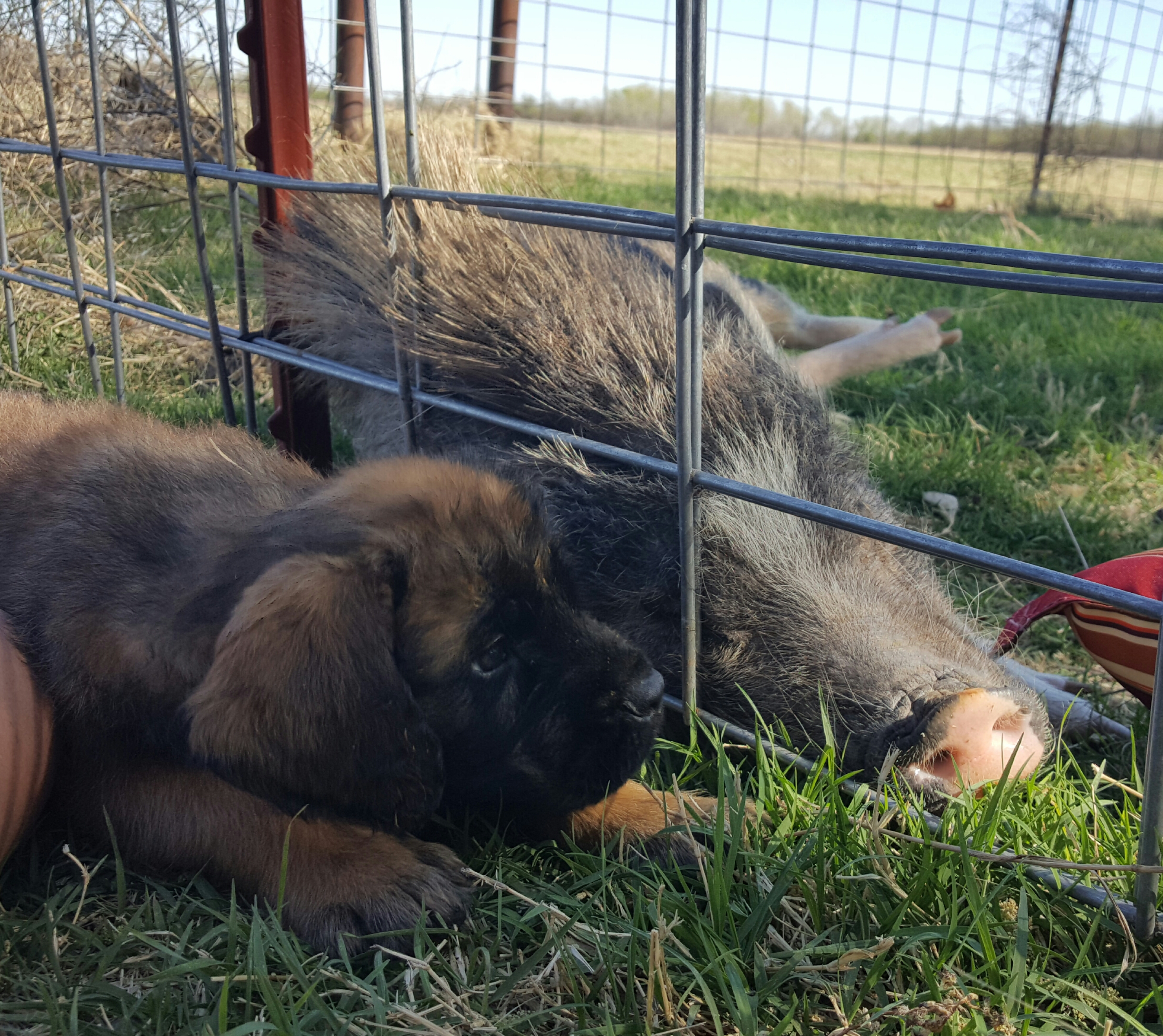