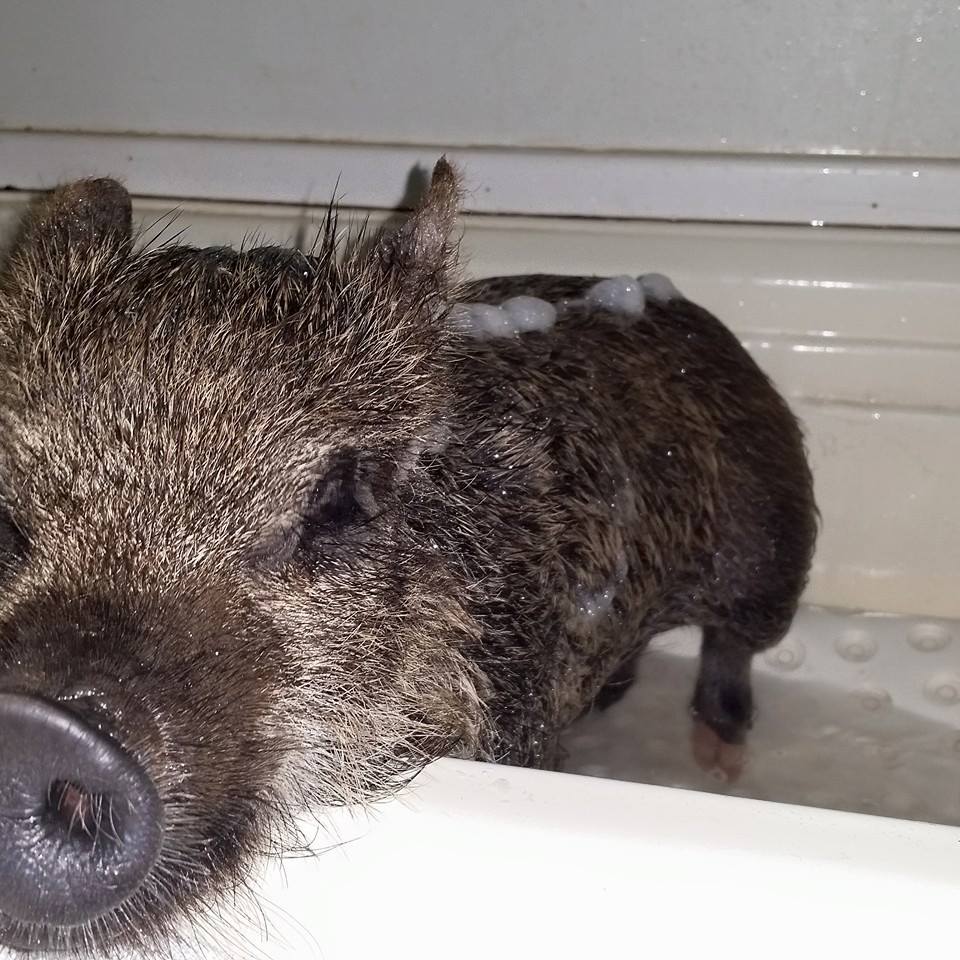 Salt poisoning is a complicated thing that depends upon the BALANCE of salt and water.

If salt has just been ingested, and there are no symptoms, then we treat it by giving lots of water. This allows salt and water to be absorbed in the correct amounts at the same time and prevents the salt from reaching poisonous levels.

Another thing that can happen is that the pig can dump its water over or have its water frozen. No excess salt is ingested. But dehydration shrinks the brain cells. If you give lots of water, the water rushed into the brain cells, cells swell, brain swelling. In this case, you have to give an electrolyte so that the salt and water rise together at the same time, to prevent the rush of water into the brain cells.

Once symptoms develop, IV fluids are needed….we start with a half strength saline and slowly bring the blood salt levels down over 3-4 days to prevent excess swelling. In these cases, permanent damage is often done.

The name “salt poisoning” is a bit misleading because it usually takes both a salty meal AND limited water to cause a problem. A few potato chips or pretzels or salted nuts will NOT cause salt poisoning in your pig.

1. Ingestion of large amounts of sodium rich breakfast cereals, especially if water is restricted. (Many cereals are prepared with baking soda, which causes high levels of sodium to remain in the finished baked product).
2. Ingestion of baking soda, table salt, baking mixes, especially if water is restricted.
3. Ingestion of Play-Doh, home-made Play-Doh, and ornaments made of home-made clay (like Christmas ornaments made for kid’s handprints). These products contain a HUGE amount of salt.
4. Frozen water or water dispensers that no longer work, empty bowls, or pigs that are locked in rooms with no access to water.
5. Ingestion of road salt or salt used on sidewalks during the winter.

HOW SALT POISONS YOUR MINI PIG:
Under normal circumstances, the pig’s body keeps the blood level of sodium within a very narrow range. When the pig eats salt, it is absorbed into the blood stream. At the same time, water is also absorbed to counterbalance the salt and maintain a steady level. In cases where a huge amount of salt is eaten (so water cannot be absorbed fast enough to compensate), or where moderate amounts are eaten but there is no water, the sodium levels in the blood will rise. At a certain point, the sodium levels get so high, that the brain is poisoned by the sodium.

SYMPTOMS:
It usually takes about 24 hours for the signs of salt poisoning to occur in pigs.
Pigs with salt poisoning tend to move their heads forward and back, in a motion that looks like a turtle trying to retract its head into its shell. They will be blind and stagger about. They will not place their feet normally and may knuckle or stumble when walking. They are able to stand and move in a straight line but may fall down when turning. They have no appetite and usually have a normal temperature.
Pigs that recover from salt poisoning will often have permanent damage – they may have personality changes that interfere with their ability to bond with people. They may be permanently lethargic and spend the majority of their time sleepy.

TREATMENT for Salt toxicity in Mini Pigs:
It is very difficult to treat salt poisoning in the pig. When the brain is poisoned by sodium, the sodium enters the cerebral spinal fluid and brain tissue. If the sodium levels in the blood are lowered too rapidly, the water rushes into the spinal fluid and into the brain and causes the brain to rapidly swell. This can cause very severe brain damage (herniation of the brain, edema of the brain) which will be fatal.
In the hospital, we place iv catheters and measure the serum sodium concentrations of the blood. We then give sodium rich fluids that have 10% less sodium than the measured blood concentrations – this slowly dilutes the sodium out of the system without causing brain swelling. We measure the blood sodium concentrations every 6 hours and adjust the fluids accordingly. These pigs are on iv fluids for about 3 days, until blood levels are normalized. Many of these pigs do not survive.

FIRST AID FOR THE SALT POISONED PIG:
If you suspect that your pig may be suffering from salt poisoning, seek medical attention as quickly as possible.
If you suspect that your pig may be suffering from salt poisoning, but cannot seek veterinary care, it is very important that you do not give plain water to your pig. If it is drinking, offer 50/50 water and Gatorade or Pedialyte rather than plain water. The Gatorade and Pedialyte contain electrolytes that will help slowly dilute the sodium levels in the blood AND sugar which will help maintain blood sugar levels in a pig that is not eating. Keep the pig indoors so that it will stay warm (or cool in the summer) and where it cannot hurt itself if it is staggering about.
If you see your pig eat Play-Doh or a LARGE salty meal, and it has been less than 6 hours, and it is not showing any signs of toxicity, induce vomiting if possible. Give 2 cups of plain water, then 50/50 water and Gatorade or Pedialyte free choice and encourage frequent drinking of this mixture. Then see your veterinarian so that blood sodium levels can be measured. Your veterinarian will want to keep your pig for approx. 12 hours to measure the sodium, and will start appropriate treatment if the sodium levels begin to rise.
If your pig is already showing symptoms, do NOT induce vomiting (your pig will aspirate vomitus into the lungs because it will be impaired). Seek veterinary care immediately.

For More info on Mini Pigs Check out:
www.americanminipigassociation.com