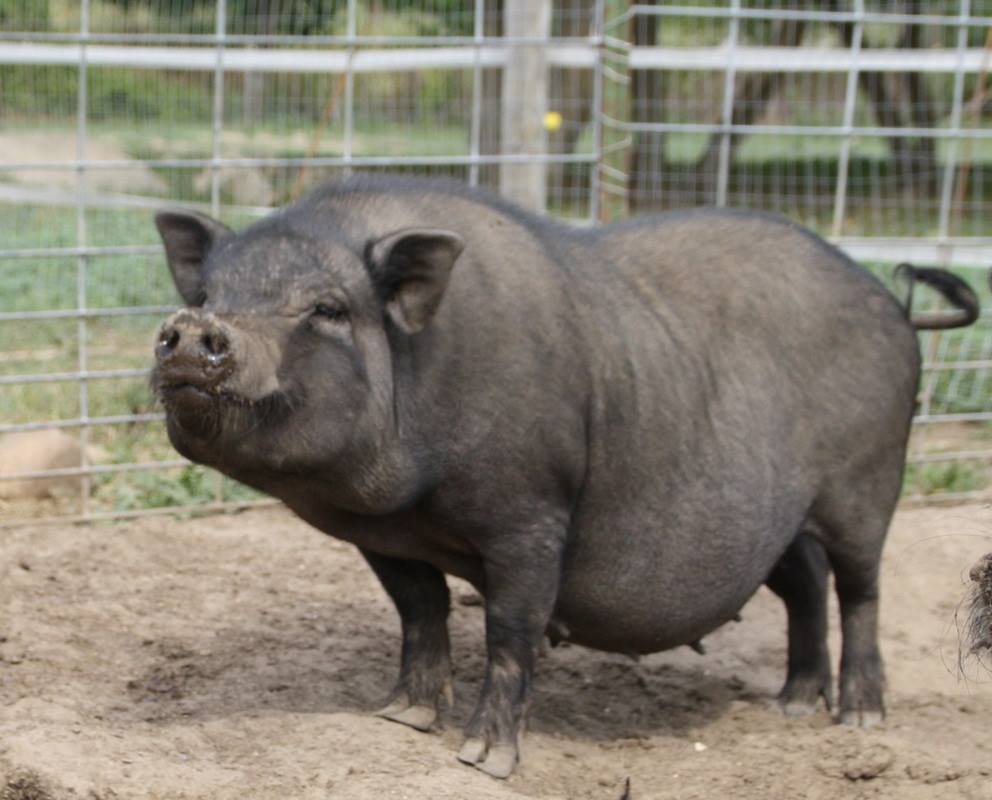 The first thing you should know about pot-bellied pigs is that they are not a single specific breed.
The pot-bellied pig, also known as the Chinese, Asian, or Vietnamese Pot-bellied pig, is a
domesticated “breed” of pig that originates from the Southeast Eurasian continent. It has 15 local
“breed types” that make up the Pot-bellied pig “breed”, that can only be found in the
mountainous regions of Vietnam, China, and Thailand. Many of these “local breed type” potbellies can now be found all around the world. While these local types do share some significant
build characteristics it has been shown that they are not all that closely related genetically.
Pot-bellied pigs in the U.S. today, can be traced back to a few different imported “lines”. The
Con, Lea and Royal represent most of the foundation stock for pot-bellies in America today.
Keith Connell imported some to the U.S. from Canada (originally for zoological purposes) in
1982. Keith named them the “Con” line. At least two other “local breed types” were brought into
the U.S. shortly after Keith Connell’s “Con line”. The “Lea Line” imported by Leavitt (white and
black markings) and the “Royal Line”, imported by Espberger (mostly white, somewhat larger
than the “Lea Line”). By American and European sta ndards all “local types” of pot-bellied pig
are relatively small, standing at 16-28 inches tall.
The different imported lines provide a larger gene pool to work with. Giving us a healthier breed
type that enables breeders to develop more desirable characteristics (size, disposition, color,
conformation, etc.) better suited for domesticated companionship.
The “local breed types” imported to the U.S. were as follows:
The “I”, which is found in the West near the Red River Delta. It is the type most common in
Vietnam and the pig known as the Vietnamese potbellied pig. It is believed that this breed is the
original “Con Line” Imported by Keith Connell. On the larger side at an average of 150-200
pounds, but still very small compared with European and American domestic pigs. Its black skin
is wrinkled, particularly on the head with a dished face , narrow forehead and small upright ears.
The “Heo Moi” sometimes referred to as the Vietnamese primitive, originally roamed the
mountain area on the Southern Vietnam. Also very small at an average of 100-200 pounds, they
were sway backed with hanging stomachs and a longer snout.
The “Mong Cai” is found in the Northeast near the Chinese border and Gulf of Tongkine. It is
slightly larger than the “I”. They have more hair, white with a black
head, white snout (sometimes a white star) and black patches elsewhere on the body (sometimes
with saddle markings). This general appearance is generally associated with the “Lea Line”.
The “Co”, originally wide-spread in central
Vietnam, it is now restricted to the high plateau region. They are a more short well rounded pig
with more of a sloped back compared to the more common sway back. It is obvious that this
breed type has greatly influenced our “American” potbellied pigs as well as our American Minis
and Julianas.
By taking what we know of these imported “breed types” of pot belly pigs we can still see their
characteristics in today’s modern “American Pot-Bellied Pigs” as well as the modern American
Mini Pig and Juliana.
American Pot-Bellied Pig
Vision should be mostly unobstructed.
The overall weight of the pig should be such that it is comfortable and able to run and move
freely.
1. Ears: small erect ears
2. Head: Wrinkled face with a short to medium snout.
3. Neck: large jowls in proportion to the head with a short neck
4. Body/Back: pronounced potbelly with a swayed back
5. Tail: straight tail sometimes with a switch at the end
6. Legs: short in comparison to the body
7. Feet: strong, even, and forward facing
8. Skin/Hair: thin to medium hair coverage(skin is visible)
9. Temperament: Very placid and among the smartest of all miniature pig breeds
10. Average height: 16-28 inches

What is Celebrex medicine prescribed for? This medication is a nonsteroidal anti-inflammatory drug (NSAID) which belongs to the family of cyclooxygenase 2 (COX-2) inhibitors, commonly called coxibs.